Do The SEC Enforcement Directors’ 2019 Successes Preview Their 2020 Priorities? 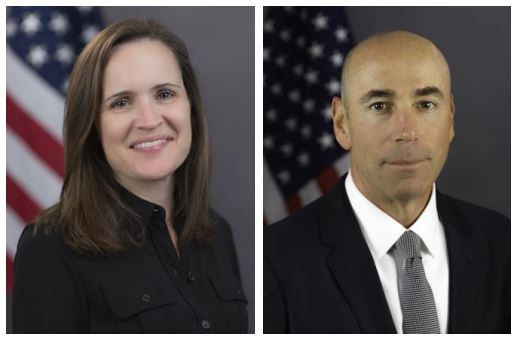 Despite “significant headwinds,” including “adverse” holdings in Supreme Court cases and a significant disruption in Congressional funding in the beginning of the year, Co-Directors of the SEC Enforcement Division Stephanie Avakian and Steven Peikin announced that their efforts in FY 2019 have been successful. In a recently published Annual Report, the Directors described enforcement actions that held wrongdoers accountable, removed bad actors, stopped frauds and prevented losses. The report also highlighted that many of the enforcement actions resulted in harmed investors being made whole. According to the report, SEC enforcement in 2019 concentrated on two priorities: retail investor protection and combatting cyber threats. Here are some of the key observations.

The report highlighted “extraordinary results” from the agency’s Share Class Selection Disclosure Initiative, an effort intended to protect retail investors from failures by investment advisors to disclose conflicts of interest on different share class compensation schemes. (See here for our review of the latest alert on the SEC’s efforts concerning investment advisor compensation issues.)  According to the report, the SEC, to date, has ordered 95 investment advisor firms that self-reported their disclosure failures to return $135 million to impacted investors. While the Division of Enforcement did not impose civil penalties in these cases (part of the incentive to report under the initiative), participating firms were required to align their practices and disclosures going forward.

The division was very active in “standalone” cases to protect retail investors. The numbers detailed in the report reflect this priority.  Of the 862 enforcement actions brought in 2019, 526 were standalone actions brought in federal court or as administrative proceedings. (The others include “follow on” actions tied to other regulators or criminal authorities, and proceedings to deregister public companies that were delinquent in Commission filings.) The number of standalone cases breaks down as follows: investment advisory/investment company issues (constituting the greatest increase in enforcement actions at 36%), securities offerings (21%), issuer reporting/accounting and auditing matters (17%), broker-dealers issues (7%), insider trading (6%), and market manipulation (6%). Other areas include FCPA (3%) and Public Finance (3%). The charts below provide the numerical breakdown for comparison with FY 2018. 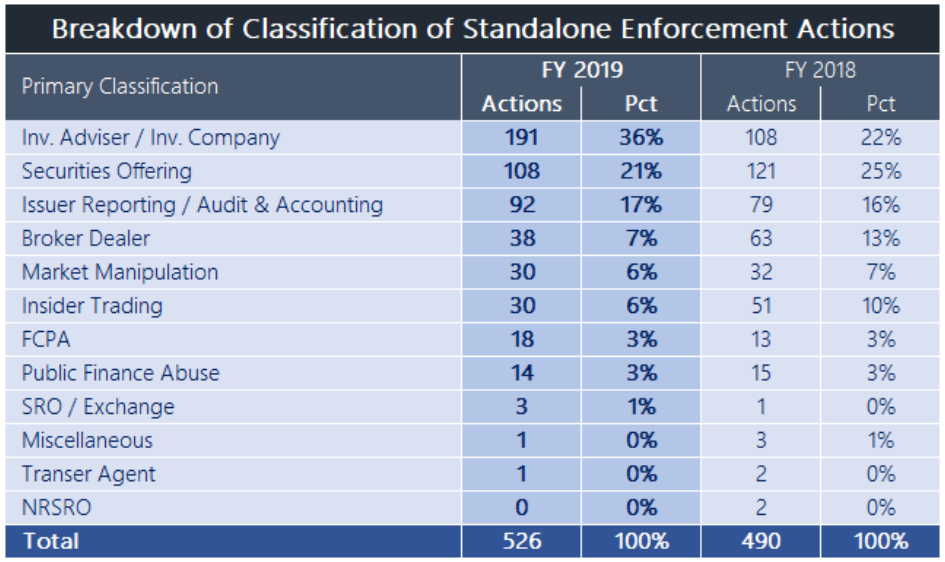 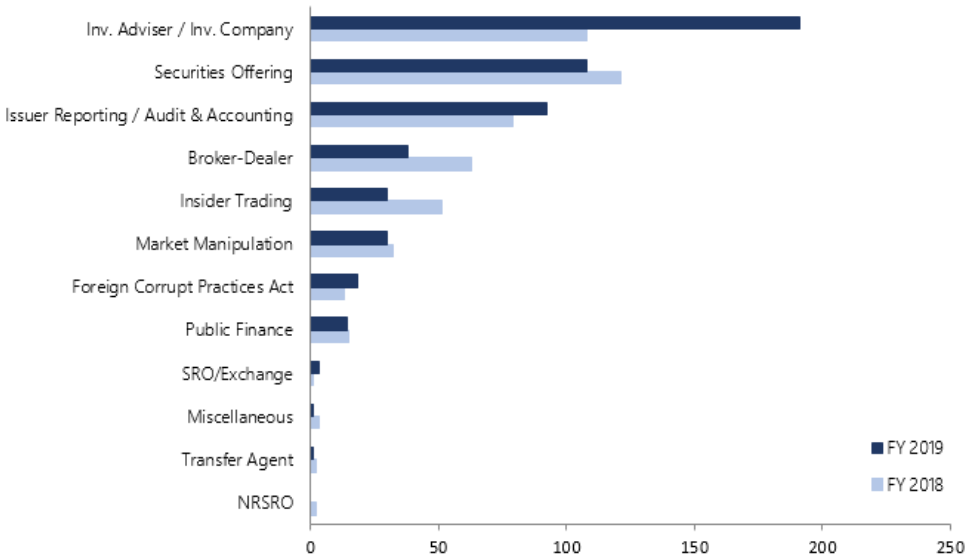 Furthermore, the division reported a total of $3.248 billion in disgorgement of ill-gotten gains, with additional penalties of $1.101 billion.  This represents, in aggregate, a $404 million (10%) increase year-over-year.

The SEC also noted recent retail investor protection efforts under its Retail Strategy Task Force (“RSTF”). The RSTF is comprised of enforcement personnel from around the country and works with SEC staff employing data-driven analytics to help identify financial market practices that can harm retail investors. It also supports retail investor advocacy and outreach. The report underscored new initiatives to educate teachers, veterans and active duty military personnel on the basics of savings and investment, fees and expenses, retirement programs, and “the red flags of investment fraud.”

As part of its cybersecurity focus, the division counted victories in investigating “violations involving distributed ledger technology, cyber intrusions, and hacking to obtain material, nonpublic information.” Specifically, the division described its increasingly sophisticated capability and developing approach to distributed ledger accountability and misconduct. The division said that recent settlements with issuers of digital assets (ICOs) helped to establish registration and reporting frameworks for future resolutions. The commission also brought actions against third parties for violating securities laws regarding the offer, sale and promotion of digital asset securities. Legally, the SEC stated that its enforcement actions in this space “send the clear message that, if a product is a security, regardless of the label attached to it, those who issue, promote, or provide a platform for buying and selling that security must comply with the investor protection requirements of the federal securities laws.”

Among its broad efforts on cybersecurity the commission conducted investigations of public companies and regulated exchanges for potential violations of system compliance rules intended to ensure the security of the technology infrastructure of U.S. securities markets. The SEC said that in the last few years, it initiated investigations associated with accounting rule irregularities that pointed to such violations and concluded that “having sufficient internal accounting controls plays an important role in an issuer’s risk management approach to external cyber-related threats.” Further, the SEC described actions it took against financial institutions for improper conduct that undermined market integrity in connection with the “pre-release” of American Depository Receipts (ADRs).

The SEC emphasized its developing use of analytics to identify trade-related impropriety. According to the report, for example, the identification of the overseas hackers who accessed the SEC’s EDGAR system to steal nonpublic information for use in illegal trading “showcased” the agency’s expanding capabilities to identify patterns in the suspicious activity. Central to this approach is the importance of accurate financial and other disclosures—“the bedrock of our capital markets”—critical to the detection, remediation and punishment of misconduct by individuals and corporations. The report went on to list a number of cases that focused on financial statement integrity, the accuracy of issuer disclosures, and the demonstrable willingness by the agency to punish significant corporate wrongdoing.

The Co-Directors lauded the efforts of the division, but noted that they were also limited by decisions from the Supreme Court, notably the 2017 holding in Kokesh v. SEC, which “continues to impact adversely the Commission’s ability to return funds to investors injured by long running frauds.” In that case, the court found that disgorgement constitutes a “penalty,” and is therefore subject to the five-year statute of limitations. As a result, the SEC cannot seek that remedy for ill-gotten gains older than five years. The Division calculated that the ruling forced it “to forego approximately $1.1 billion” and added that it does not include the impact Kokesh has had on SEC resource allocations, which were redirected toward cases with greater potential for recovery.

The Co-Directors also noted the impact of Lucia v. SEC, a 2018 decision that found the way the agency appointed Administrative Law Judges violated the “appointments clause” of the U.S. Constitution. The ruling forced a stay, and approximately 200 administrative proceedings were reassigned. Though many of the matters resolved without the need to have a rehearing, there were others that required a full rehearing before new ALJs and the co-directors said they anticipate additional rehearings in the next fiscal year.

It is clear that the Division of Enforcement has been aggressive this year, despite continued limitations on resources, evolving standards for retail investors and significant legal and cyber-regulatory developments. The Co-Directors provide a clear picture of the management challenges as well as the importance and reliance on data analytics to keep up with the changes. The SEC is likely to issue its Examination priorities soon, and it will be interesting to see if the enforcement trends identified in this report will be reflected in those priorities. Bates Research will continue to keep you apprised.