Bates In The Community

Bates Group is dedicated to giving back to the communities where we work and live by donating our time and talent. Below we highlight some of the contributions made by members of the Bates team:

Bates Group was proud to sponsor a visit by the Oregon Humane Society's Snuggle Express on December 12th. Each Snuggle Express visit aims to share the joy of companion animals, brighten the day of employees, relieve holiday stress, and help socialize OHS shelter pets, many of whom are part of the Second Chance program. Since it was established in 1997, the OHS's Second Chance program has grown into a partnership with over 90 shelters and rescue groups all with the same goal in mind – to save lives! In 2018, more than 6,000 pets were adopted from Second Chance partner shelters in Oregon and Southern Washington. It was one of the highlights of our year to snuggle with these furry friends and support the work of the OHS. 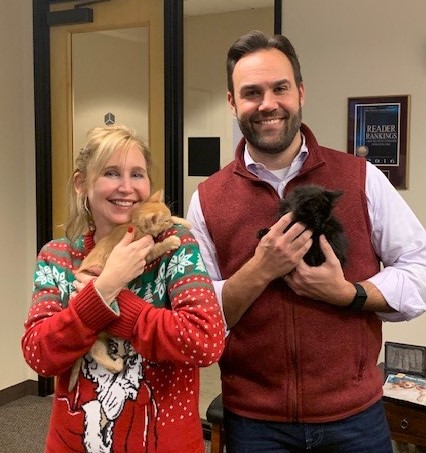 Mika Stenberg, Executive Assistant for Bates Compliance and Bates AML & Financial Crimes, crochets and knits items to raise money for different charities across the country as Magic Unicorn. Over the past 4 years, she has raised nearly $70,000 for such groups as Stop Soldier Suicide, K9 Warriors, Juvenile Diabetes Research Foundation, St. Jude’s Children’s Hospital and the Alzheimer’s Foundation. Mika also donates items directly to people—and animals—who are in need. Below are some examples of Mika's handiwork. 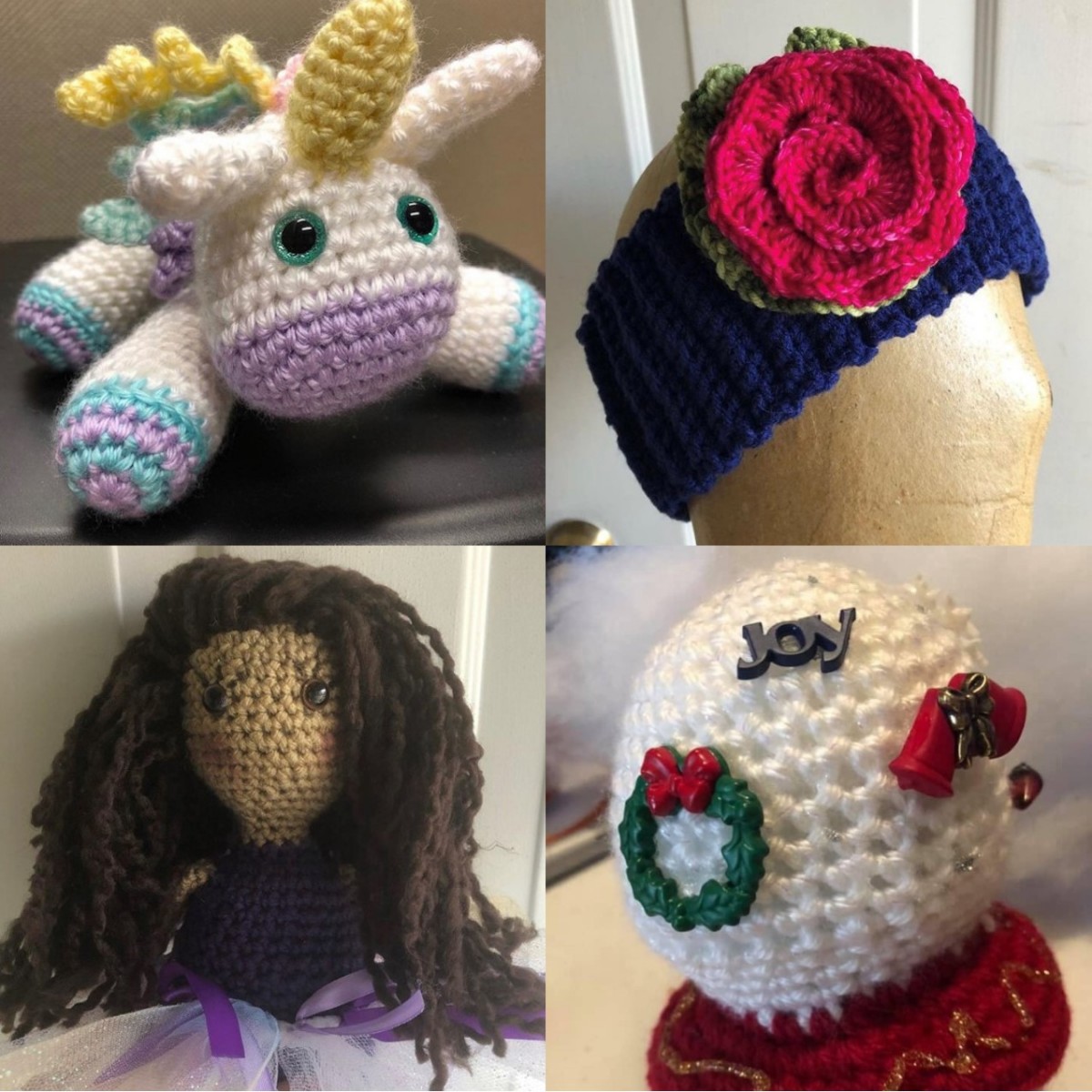 Bates Senior Associate Lauren Clement volunteered her time this summer with other Rubik's Cube fans at the CubingUSA Nationals 2019, August 1-4 in Baltimore, Maryland. The CubingUSA Nationals is the largest and most professional speedcubing competition in the U.S. Lauren joined the team of dedicated volunteers who work year-round to produce the event. In July, she traveled to Melbourne, Australia to volunteer at the 10th WCA Speedcubing World Championship. Every two years, speedcubers from around the world gather for an extended weekend of puzzle solving and intense competition for 18 World Championship titles. 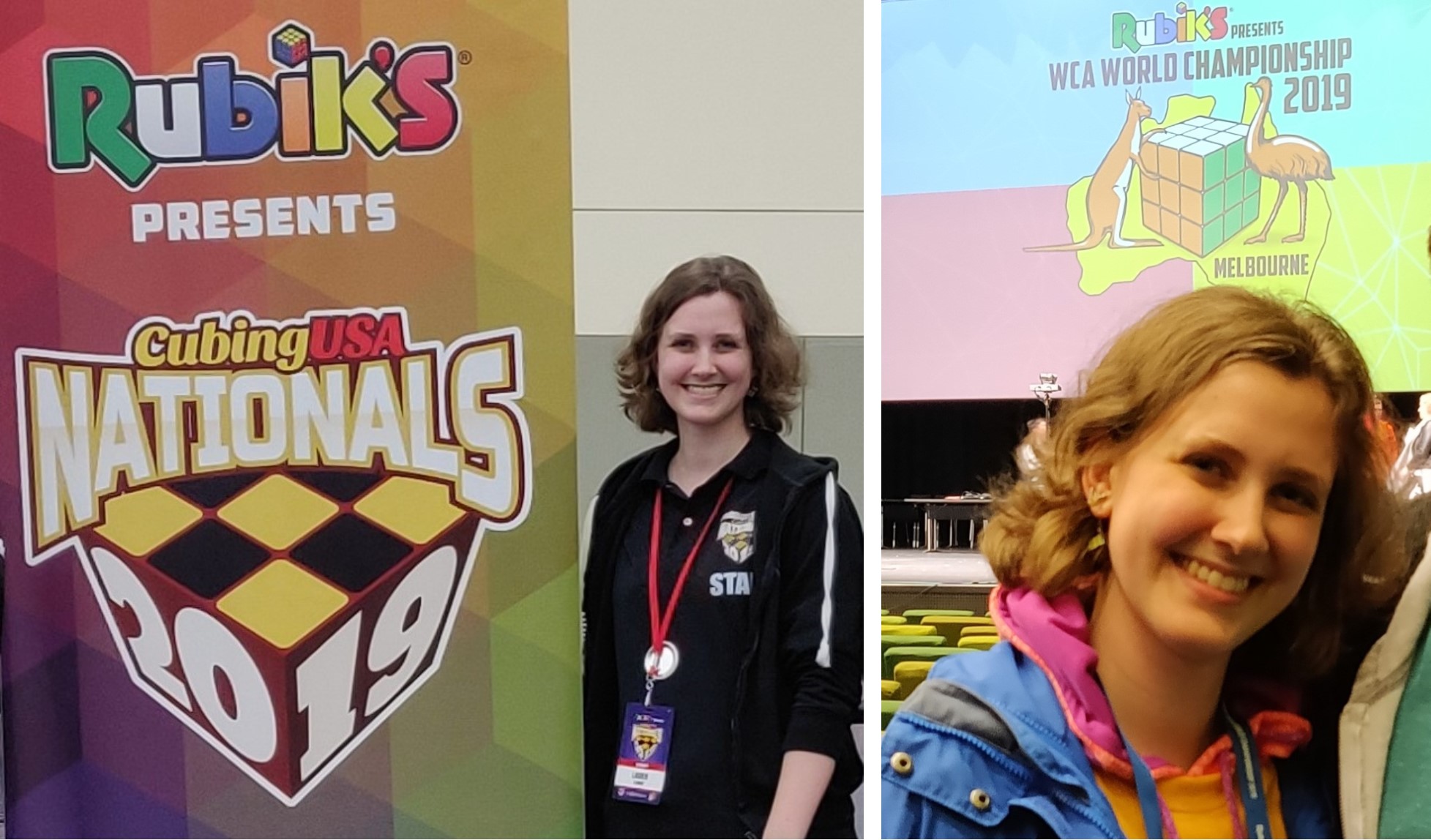 Tony Ogden, Bates Group’s Chief Legal and Administrative Officer, joined the DoveLewis Board of Directors in May 2019. DoveLewis is Oregon’s only nonprofit emergency animal hospital, whose donor-funded programs support thousands of people and animals. Tony’s relationship with the hospital began in 2017 when a DoveLewis board-certified internal medicine specialist treated his dog, Brenna. It was during those visits that Tony and his husband became enamored with the hospitals’ mission to help animals and the people who love them, and he knew he needed be involved. Learn more about DoveLewis and its mission at dovelewis.org. 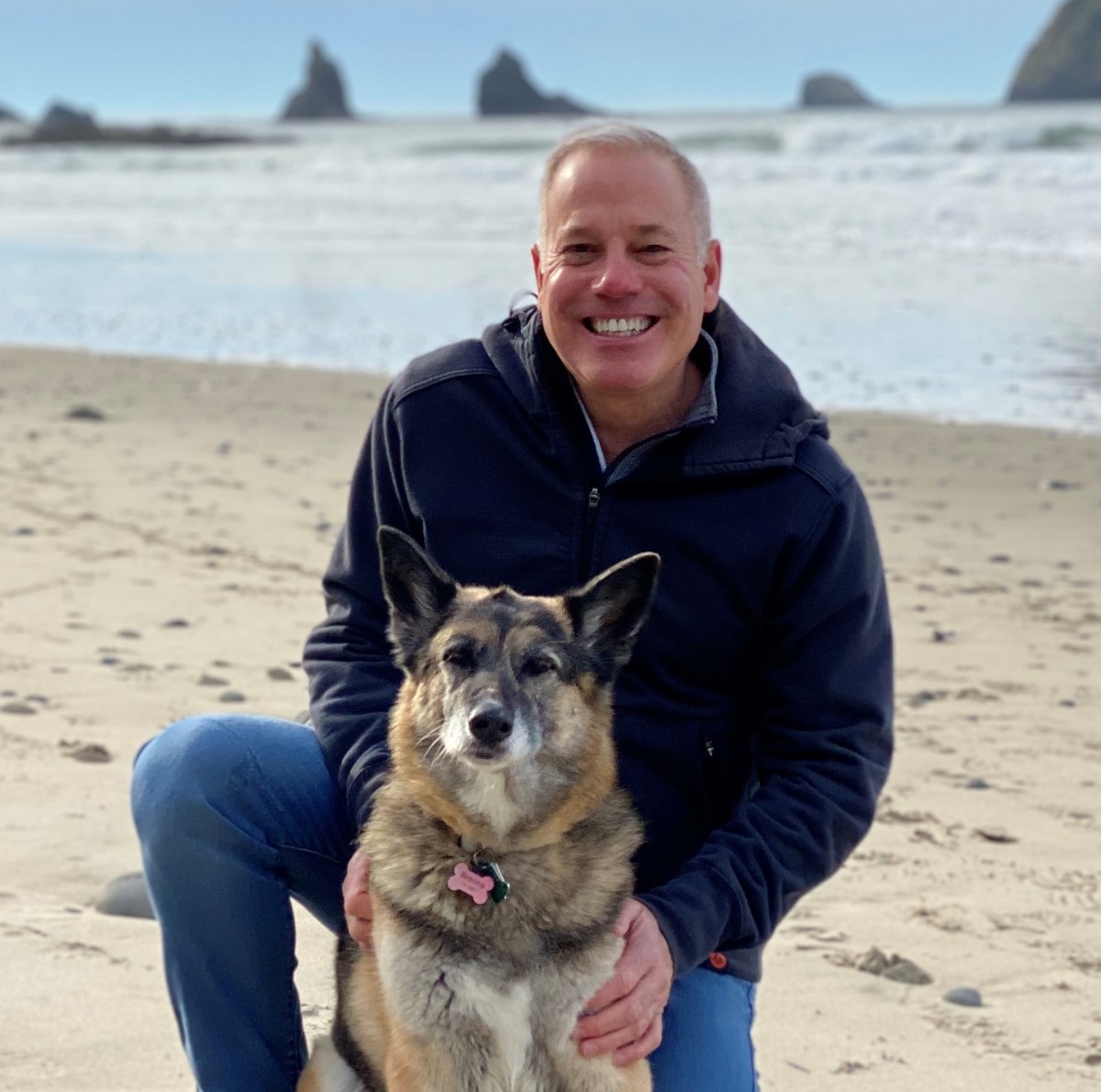 As founding Chair of the New York State Bar Association’s (NSYBA) Women and Law Section, Bates Group Managing Director Susan Harper was honored by Hofstra University Law School in April 2019 as an “Outstanding Woman in Law” for her work advancing women in the legal profession and in society. Susan has championed legislative and policy efforts to advance equal pay, state and federal constitutional equality, paid leave laws, domestic violence, and female prisoners’ rights. Earlier this year, on behalf of NYSBA, Susan testified in the New York State Legislature’s historic sexual harassment hearings, the first since 1992. In honor of New York State’s 100th Anniversary of Women’s Suffrage in 2017 and the 100th Anniversary of the ratification of the 19th Amendment, Susan led the creation of a traveling suffrage exhibit on display throughout the New York Courts, along with a companion pamphlet, and has made presentations on suffrage and the achievement of legal rights to the judiciary, students, and the legal community. 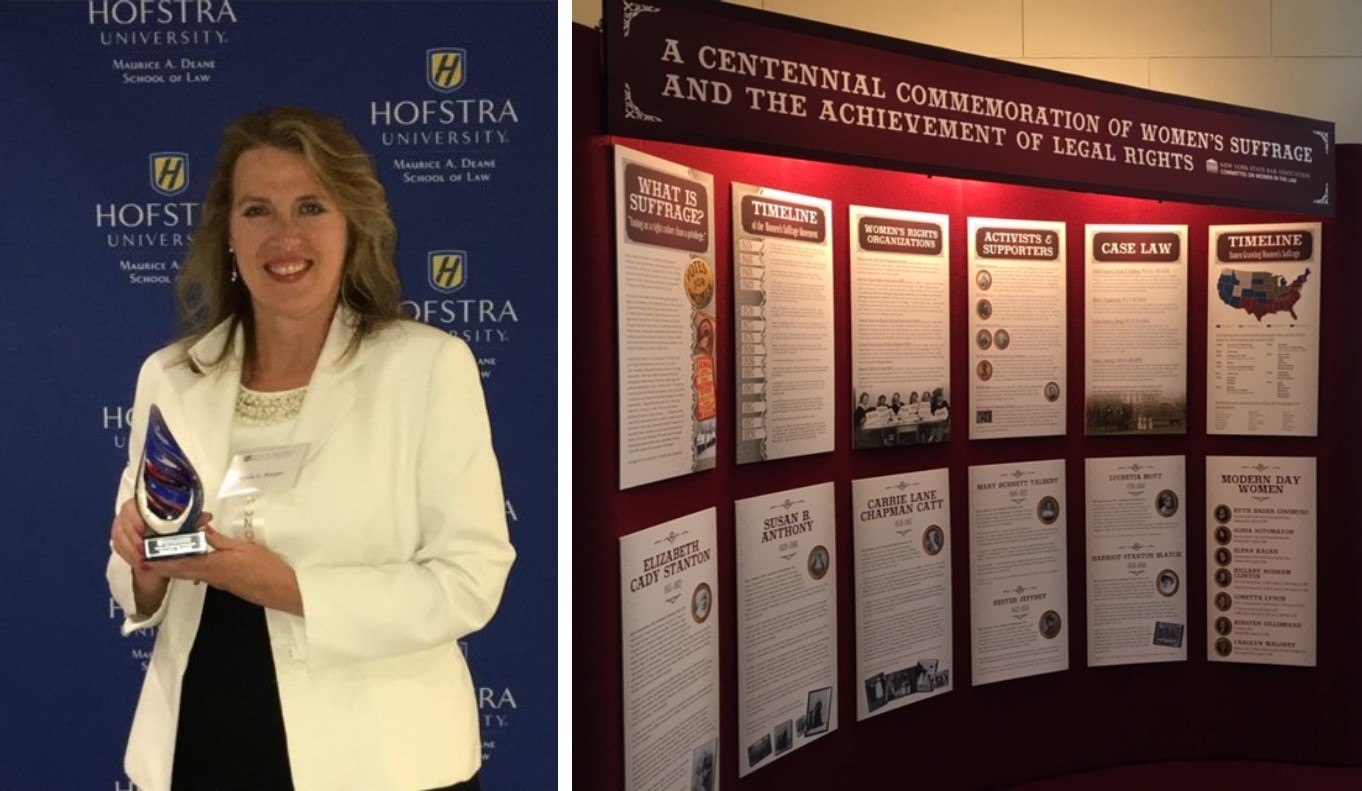 Bates Expert Bill Jannace traveled to the Czech Republic in May to represent his family at the 2019 Liberation of Pilsen Festival, honoring the Second Infantry and Sixteenth Armored Divisions, as well as the French, Belgian and Czech soldiers that were involved. The liberation of Czechoslovakia by the Allied troops in May 1945 ended the European part of WWII, and on May 6, American soldiers entered the city of Pilsen. Bill's father, PFC Anthony E. Jannace, was among them. Every May since 1990, Pilsen celebrates that event with a Liberation Festival, where people from around the world celebrate with the Czech people for four days. Bill’s heartfelt letter to the people of Pilsen was published honoring the occasion. Read his remarks here. 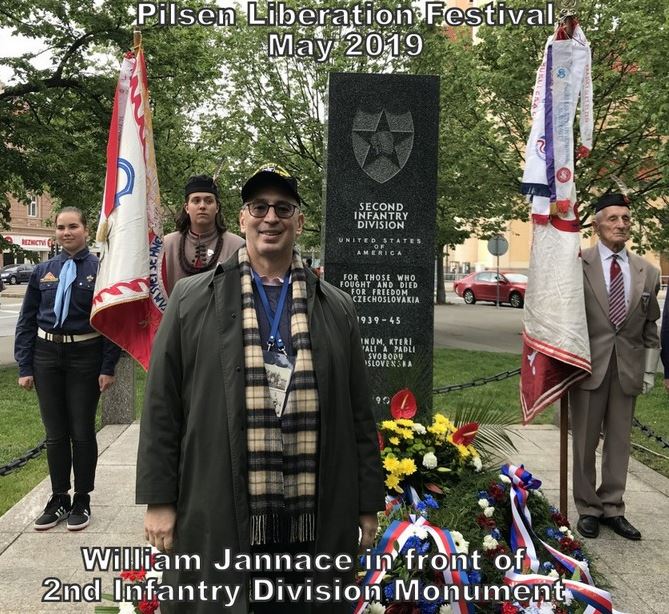 The CARE Women’s Network – New York Chapter (CWN-NY, formally known as CARE’s New York Women’s Initiative) started in 1998 to raise awareness and financial support for select CARE projects. Since their founding, they have contributed more than $2 million toward CARE’s global programs. Bates Expert Sheila Murphy is the CWN-NY Co-Chair, leading a group of passionate women committed to CARE's mission of saving lives, defeating poverty and achieving social justice. On a two-year basis, they select a project focused on empowering women and girls in developing countries, as well as advocate and educate on behalf of such programs. CWN-NY has supported such projects as reducing gender-based violence in Guatemala, educating and empowering girls in Ecuador, and an education project for middle school girls in Afghanistan. This year's committment is to improving the health care system for infants and their mothers in Bihar, India, which has saved already over 20,000 lives. 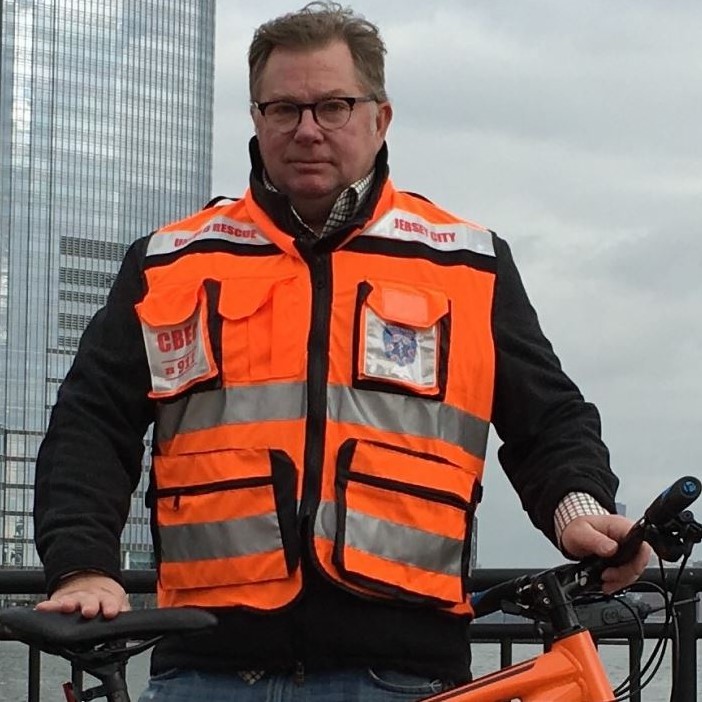 This winter, Bates Group is hosting a food and clothing drive in partnership with the Sunshine Division, a year-round, direct emergency food and clothing provider in the Portland Metropolitan area. In operation for over 9 decades, Sunshine Division serves over 1,500 families every month through their front doors and also makes bulk donations of food to 15+ other food relief agencies in five Oregon counties. With the help of hundreds of volunteers, the Sunshine Division will pack and deliver over 3,800 Holiday Food Boxes this December. Many thanks to Bates HR Assistant Kaitlyn Messinger and Senior Associate Scott Halladin for their support with the donations. 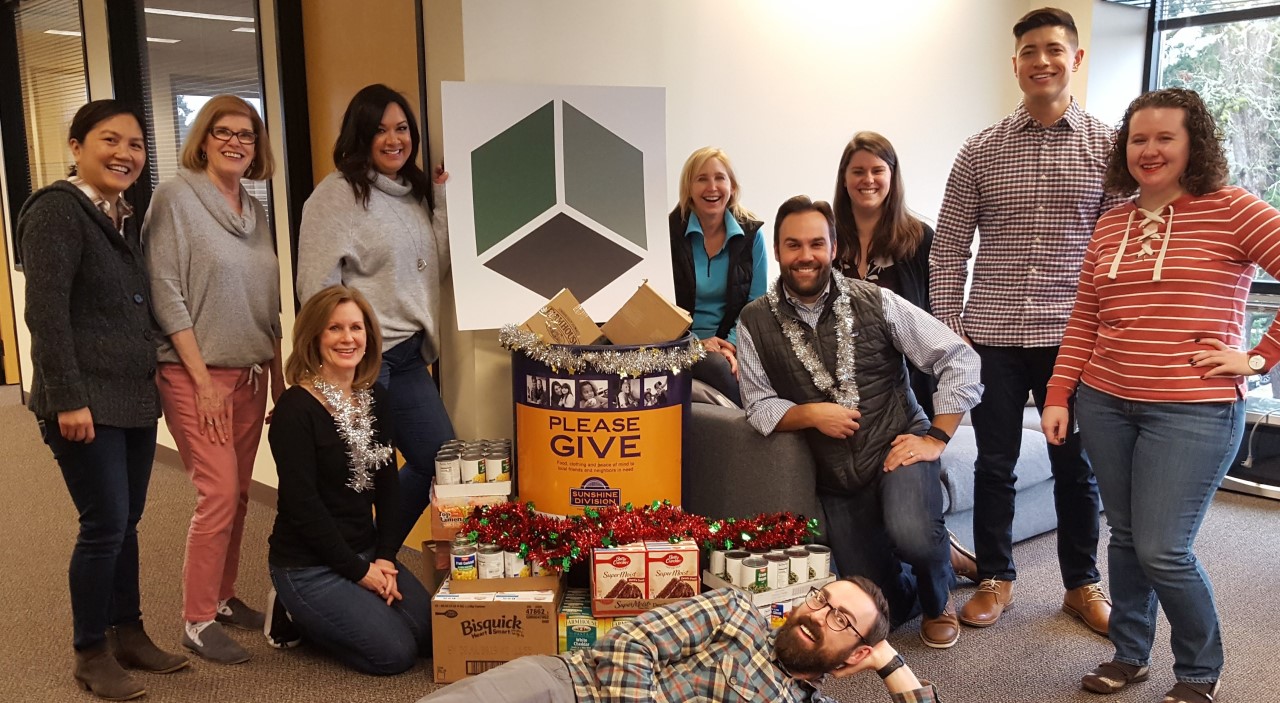 This year, Bates has partnered with SARC Oregon to provide emergency recovery kits for sexual assault survivors. In operation since 1977, SARC (Sexual Assault Resource Center) provides free and confidential services to survivors of sexual assault which include support, counseling, and advocacy. Many thanks to Bates CEO Jennifer Stout and Office Manager Mike Eisenberg for arranging this year's service project and to all our staff who dedicated time and resources assembling and delivering the kits. 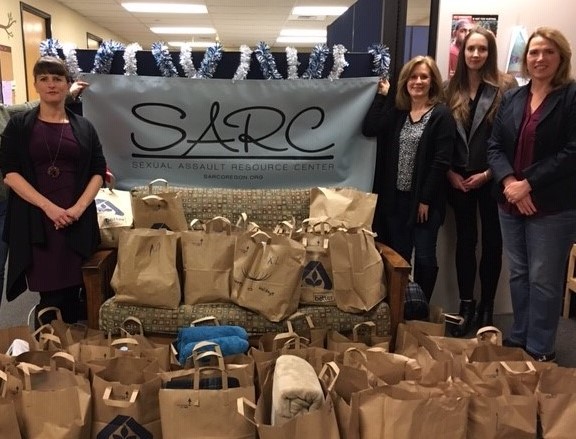 Click here to see more photos from our 2018 service day.

Bates Group analyst David Jones has been a basketball and softball coach with Special Olympics Oregon in Clackamas County for many years. Due to budget shortfalls, there were no Oregon state games this year, but local teams still participated in scrimmage matches. Clackamas walked away with 2 wins in softball! 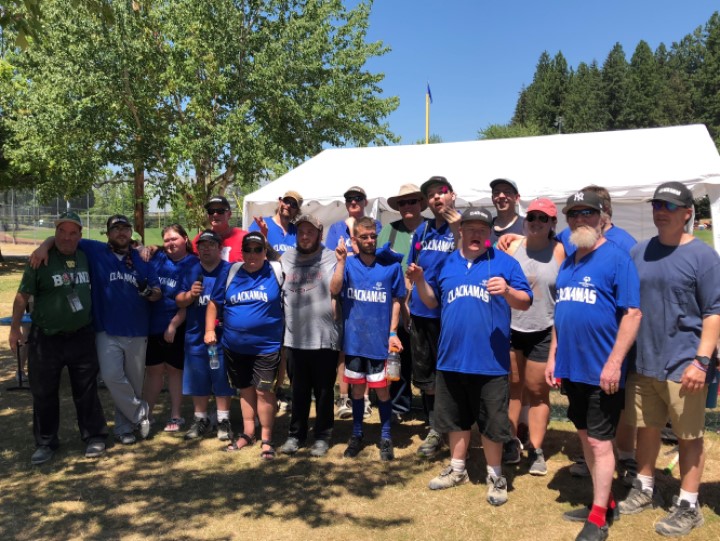 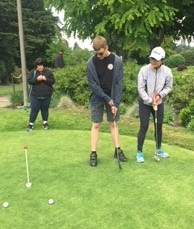 The Board enjoys lending their "time, talents and treasures" to do the most good for those less fortunate and in need in their communities. 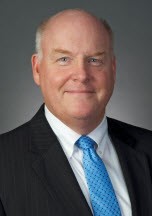 Joyce Thompson appeared as a Career Enrichment Guest Speaker at a Tualatin HIgh School technology class. Joyce spoke about her work as Bates Group's IT Manager to inspire students thinking about going into the IT and Technology industries. 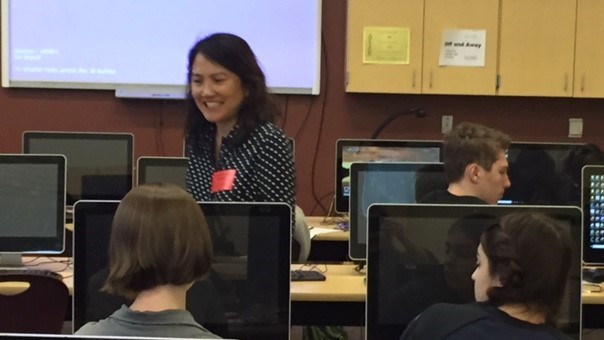 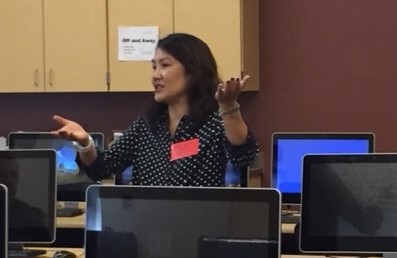 Dressers are consistently one of the most needed items at Community Warehouse and one of the top requests received from needy families. The Dresser Project is a program that raises funds for dressers while providing fun, engaging volunteer opportunities, ensuring enough dressers on hand to meet every family's needs. As we share in our photo link below, the project was a great team effort, full of smiles and laughs (yes, we learned that some of us are definitely handier then others), and a sense of great pride in our finished product of seven pieces of new furniture that we built together.

Community Warehouse is a local Portland nonprofit “furniture bank” which collects and redistributes donated furniture and household goods to neighbors in need. Community Warehouse is the main resource for low income individuals and families in NW Oregon and SW Washington seeking essential household furnishings. It coordinates distribution through a network of more than 200 social service agencies and engages a staff of 25 in addition to 180 active volunteers. 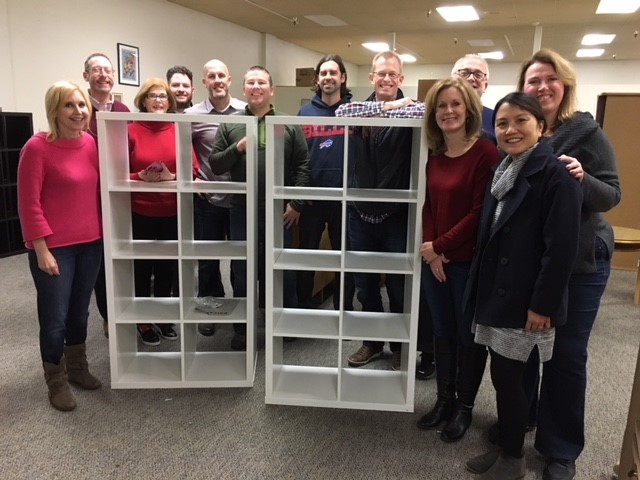 Bates Group Director Greg Kyle was recently certified as an Emergency Medical Responder as part of a community-based emergency medical services program new to the U.S. United Rescue in Jersey City, NJ is the first of its kind in this country, and is run in conjunction with Jersey City Medical Center EMS. It is based on the very successful United Hatzalah program in Israel (Hatzalah is Hebrew for Rescue).

With ambulance arrival times averaging 11 minutes in many U.S. cities, the goal of the program is to build a community of volunteer EMRs who can quickly respond to critical incidents in their immediate vicinity, when every second matters. In Israel, United Hatzalah has significantly reduced response times to less than 3 minutes, providing the critical pre-ambulatory care needed to stabilize victims until they can be transported to hospitals. The goal of United Rescue is to replicate that rapid, 3-minutes-or-less response time across the U.S.

Greg went through over 100 hours of training including classroom time, skills-building sessions and clinical shifts on ambulances in order to be certified to provide emergency care in his community. He is looking forward to being an active volunteer with United Rescue and doing all he can do to save lives and provide essential, critical care for those in need. 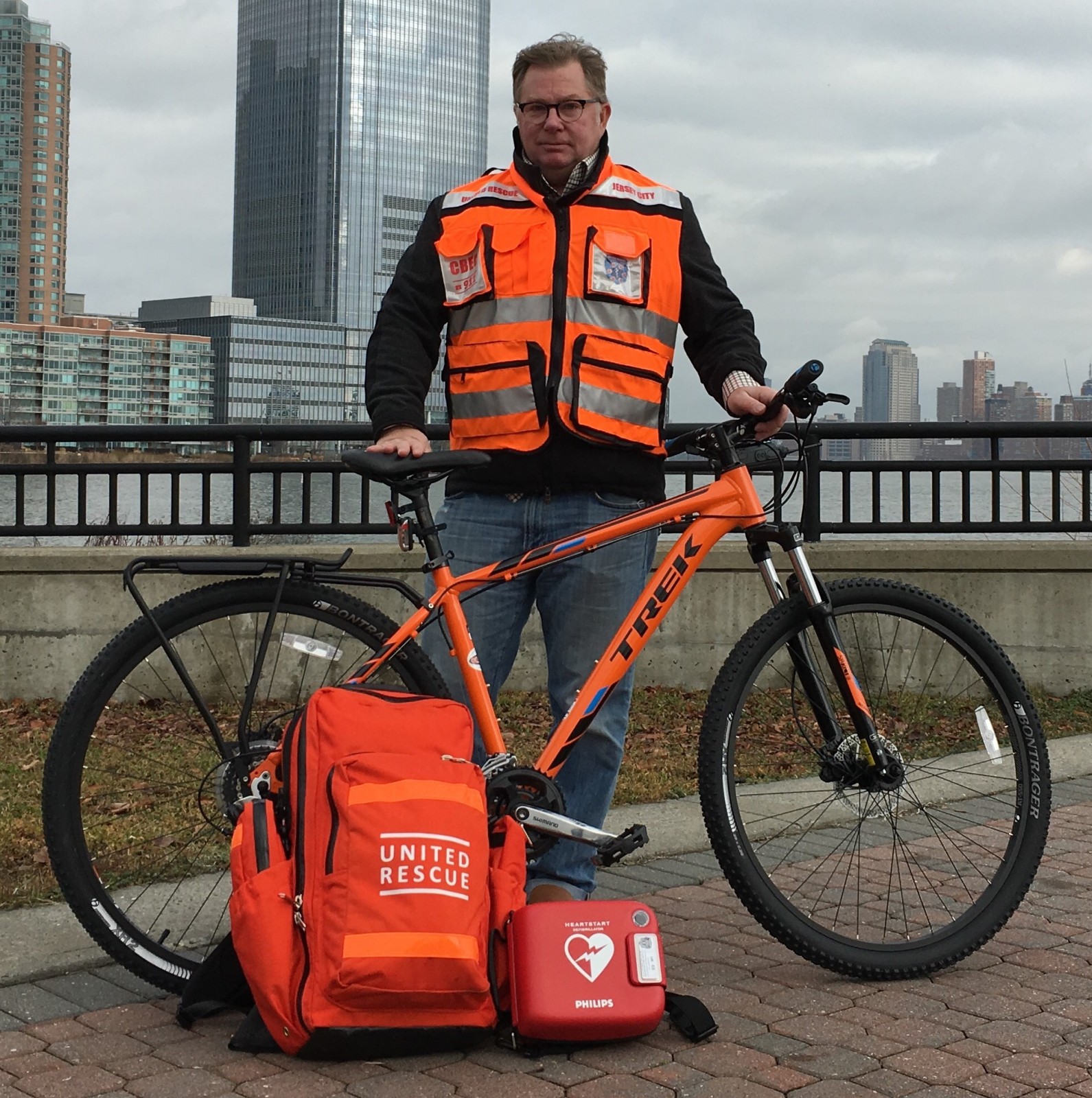 Bates Associate Jessica McNaughton has been volunteering with Oregon-based Friends of Family Farmers for several years.  The nonprofit brings together farmers and citizens to shape and support socially and environmentally responsible family-scale agriculture in Oregon.  They have a number of different programs to support existing family farmers, eaters and aspiring farmers.  These programs range from actively participating in legislative changes that may impact small scale farms, monthly education events for eaters on food production called InFarmation, a land-link program to help new farmers access land for farming and hosting purchasing events to connect farmers with people wanting to purchase local food.

Jessica feels it is important for people to understand where their food comes from.  It’s easy to get your food from a grocery store and forget about the hard working people growing that food behind the scenes.  Additionally, the average age of Oregon farmers has topped the national average for the last few years.  With the average age of farmers approaching 60, it’s important to encourage and support new farmers who want to enter the field so this important public service and economic industry is not lost.

Purchasing your food from a local, small-scale family farm is a great way to support your local community, economy and the environment.   Jessica helps Friends of Family Farmers at their events wherever she can including setup and take-down, manning tables to answer questions about local food, helping people load heavy vegetables, waiting tables at farm-to-table fundraising dinners and of course purchasing great food from local farmers. 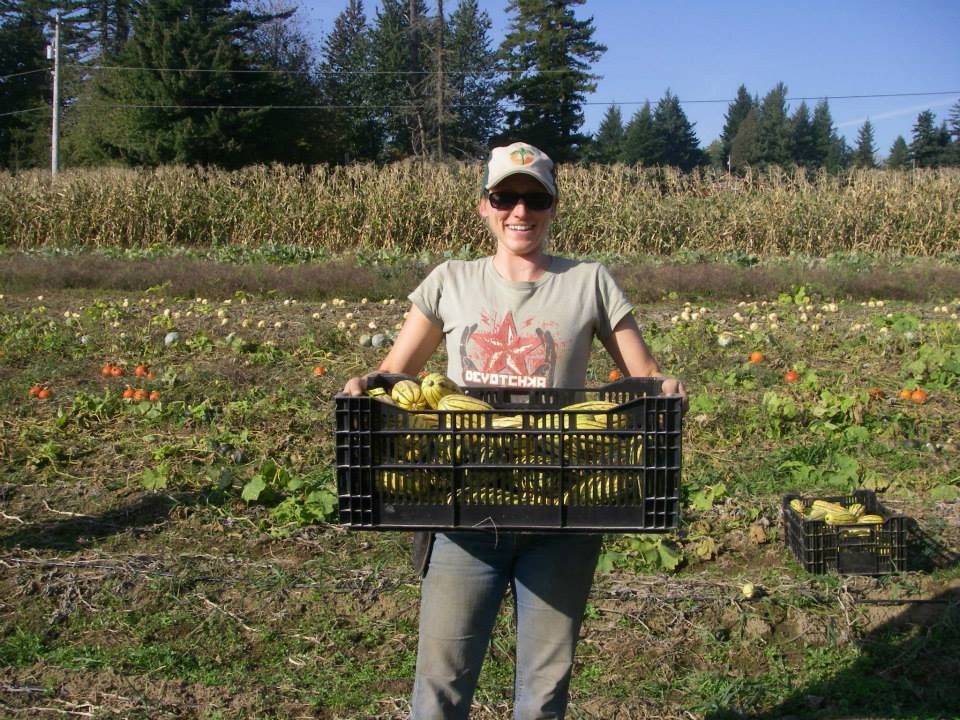 Bates Group analyst David Jones has been a coach with Special Olympics Oregon in Clackamas County for many years.  Special Olympics provides year round sports training and athletic competition for people living with intellectual disabilities of all ages and skill levels.  Competition provides athletes with opportunities to develop physical fitness, create friendships, and interact with the community.  Serving as a coach is not just about teaching a sport, but also helping athletes learn life skills and grow as individuals.

David’s younger brother, Derrick, has been an athlete for 25 years.  Both of their parents have also served as coaches in the past, so Special Olympics is a family activity as well as a charitable one.  Currently, David is an assistant coach for his brother’s basketball and softball teams.  Their team won a bronze medal in Softball during the 2016 spring games in Newburg, OR, and the 2016 basketball team (pictured below) won silver. 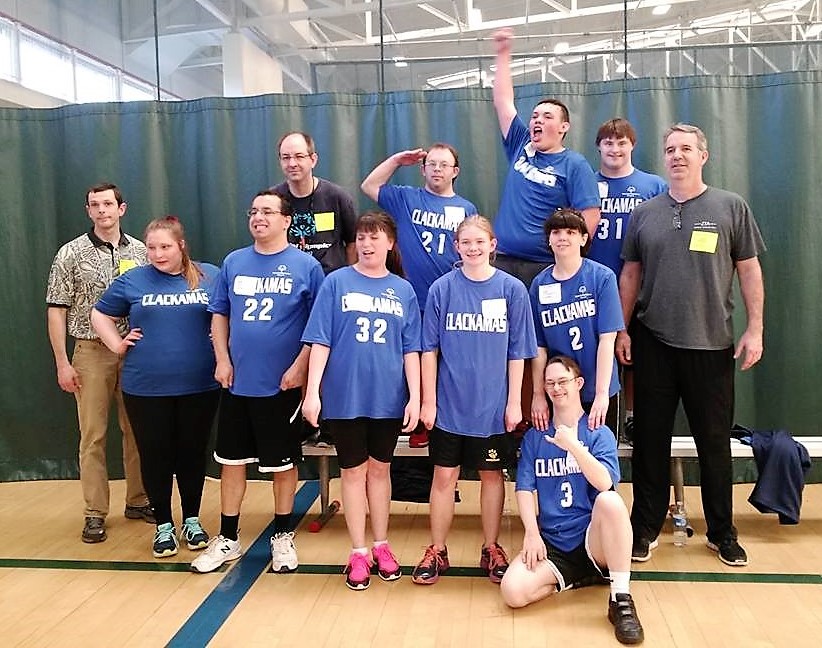 The Experts Of Bates Group Are Here To Help

Bates Group’s consulting and testifying experts have diverse backgrounds resulting in a wide variety of expertise. With all that diversity, they have one thing in common – they are all outstanding practitioners in their fields.