In May of 2012, Pershing Square Capital, a $12 billion hedge fund run by William Ackman, first began compiling a short position in Herbalife, a California-based nutrition company.  In December of 2012, Ackman publicly revealed his position to investors, labeling Herbalife a pyramid scheme, and indicating that he had taken a $1 billion position betting on its collapse.  He further indicated that he expected no profit from the short position for himself, pledging 100% of proceeds to charity.  Herbalife shares declined close to 10% in the wake of the presentation.

A public lobbying campaign began shortly thereafter - Linda T. Sanchez (D-CA) sent a letter to the FTC requesting that Herbalife be investigated.  Almost immediately, there were concerns about the extent to which Ackman was using his influence to convince others to lobby on his behalf, when it was discovered that he had disclosed news of the letter prior to it being made public, with an apparent attempt to backdate the materials made by Rep. Sanchez.

Since then, the New York Times has documented numerous examples of Ackman and those working with him lobbying for a regulatory investigation into Herbalife.  Pershing maintains its own website, factsaboutherbalife.com, which collects the short side of the story.

One thing is clear; this has been a losing investment for Ackman and Pershing.  Despite some sharp downward movements when new information has been released, Herbalife's shares are up significantly since the short position was established.  Some sources estimate that Pershing has lost 49% in this investment, the worst performer of Ackman's career.

In light of all the activity, it is easy to understand why Herbalife feels that it has been railroaded by the hedge fund.  Its unusual response was to hire  Moelis & Co, an investment bank, to solicit Pershing Square investors to consider redeeming their investments in light of the large losses created by the short position.  In addition to taking a 'lobbyist vs lobbyist' approach to battling Pershing (which Herbalife is also doing), they are attacking Pershing on the same activists grounds that they are being attacked on, and going straight for the hedge fund's investor base.

The most recent victory for Mr. Ackman came on January 23 of this year, when Senator Edward Markey (D-MA) sent letters to both the SEC and FTC requesting that Herbalife be investigated.  Herbalife shares fell approximately 11% from intraday highs on that news (see Chart below).

On March 11th, Pershing released a new presentation detailing Herbalife's alleged violations in China.  Markets seemed to shrug off this news until Wednesday, when Herbalife confirmed  that it had received a Civil Investigative Demand from the FTC.  The market then reacted strongly, with shares down about 8% from the previous day's close and over 20% based on intraday highs and lows.

One of the key questions for the FTC to answer will be whether the principal profits come from sales of product or from recruitment.  Businesses which generate most of their value in recruitment, not product sales, will have a hard time passing investigation.  Previously, in its investigation of Amway in the 1970's, the FTC focused on the issue of inventory.  One popular money-making scheme was to load up new recruits with high levels of inventory that was difficult or impossible to return.  Amway created an industry standard to defend itself from this allegation - product could be returned, but distributors had to sell at least 70% of their existing inventory each month on a wholesale or retail basis, and make at least 10 sales per month to a retail customer.  Herbalife has an interesting take on the 70% rule (namely, they don't use it), and it considers sales to other distributors to be retail sales.  What the FTC makes of these practices will largely determine the outcome of this investigation.  Over the years, the FTC has muddied its stance on these issues, most recently in 2004, when it responded to a request from the Direct Selling Association (the primary industry group for these types of companies) for clarification on the issue of compensation and sales.   It noted that "... the amount of internal consumption in any multi-level compensation business does not determine whether or not the FTC will consider the plan a pyramid scheme", while the defining line still seems to be "... a multi-level compensation system funded primarily by payments made for the right to participate in the venture is an illegal pyramid scheme".  How the FTC resolves this case will clarify its stance a great deal on what constitutes a pyramid scheme.

Finally, the current battle over Herbalife also involves a showdown between two major hedge fund investors: the aforementioned William Ackman and Carl Icahn.  The two had a personal confrontation about the company on CNBC on January 25, while news of the Markey letters was making the rounds.  Since then, Icahn has gone on to amass an even larger ownership stake (approximately 16.5%) in the company and has been vociferous in defending it against attackers.  To date, he has issued no official response to news of the investigation.

With a multitude of storylines to appeal to readers, continued coverage of this investigation is guaranteed. 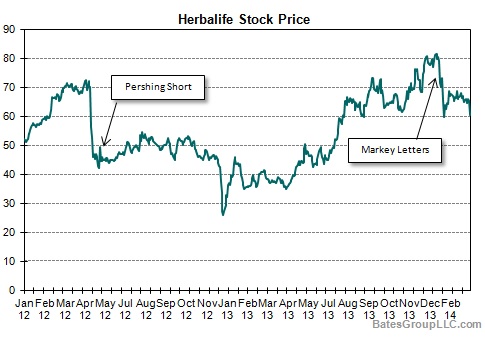