After the collapse of Lehman Brothers in 2008, the Reserve Primary fund (the oldest money market fund), announced that it would not be able to return cash to investors on a one dollar par basis.  This announcement, that a money market fund had officially "broke the buck," caused turmoil in the money markets which dramatically reduced liquidity for short term lending.  The Federal Reserve moved in to restore liquidity to the marketplace, and is now actively calling for preventative regulation of the money market industry to ensure that it does not have to step in again.

New Chairman of the SEC Mary Jo White has proposed two alternative means to ensure that money market funds are more stable in the future.   The new proposal calls for prime funds to adopt one of two practices: either let the share price of the money market fund float (like other mutual funds), or impose liquidity fees and/or restrictions on withdrawals from money market funds during times of stress.  There are several levels of exemption from these requirements available.  Funds that hold 80% of their assets in cash or government debt would be exempt, a  move criticized by the Federal Reserve as a potential incentive for the most conservative money market funds — which already keep 100% of their funds in cash or government securities — to diversify into riskier holdings down to the 80% level.  Another potential exemption applies to money market funds which serve only retail investors and would restrict withdrawals to one million dollars by any one customer per day.  This move has also been criticized in the press, which has mocked the SEC for labeling retail investors "too dumb to run" based on their behavior in the last crisis (which may not be at all indicative of their behavior in future crises).

The SEC has received numerous objections from affected parties and investors rejecting the floating NAV proposal, citing the "accounting, tax, and administrative nightmares" that this change would create.  A BlackRock survey found that about half of institutional investors would stop using money market funds if either proposed change was adopted.   The Investment Company Institute has come out in favor of the second option, adopting fees and gates to ensure that no subsequent funds break the buck.  Charles Schwab, with over $168 billion in money market fund assets, wrote the SEC to argue that the costs of making either change would outweigh the benefits to systemic stability.  Academics argue that either of these changes could result in up to $950 billion worth of cash flowing back into the traditional banking system and out of the 'shadow banking system' of which money market funds are a part.  This in turn would further contract the marketplace for commercial paper and repo transactions.  The European Union has announced that it will require money market funds to hold a capital cushion, similar to how banks operate, which industry insiders have said will make many funds 'financially unviable'.  In the long run, as interest rates continue to rise from historic lows, investors could end up short an asset that is typically included in most allocations, searching for something of comparable yield and liquidity to take its place. 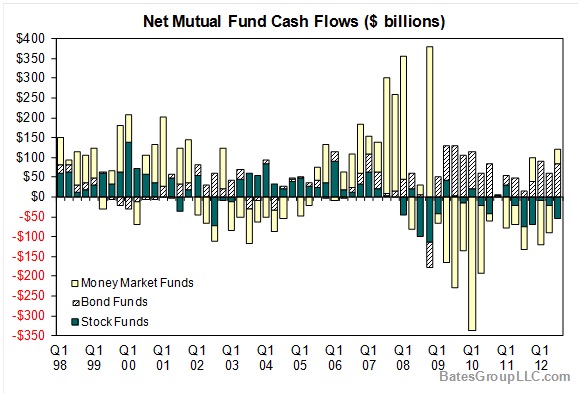