2013 was a challenging year for municipal markets, with the downgrades of Puerto Rico continuing that trend into 2014.  In times of market stress, concentrated or unbalanced portfolios can experience significantly higher volatility than experienced in recent economic cycles.  Risk-tolerant investors may view the situation as an unusual opportunity, while risk-averse investors may find solace in widely-diversified portfolios comprised of only the most conservative, highly-rated bonds.  In any case, during times of market stress and its aftermath, investor satisfaction with the investment results will ultimately depend on the ability of decision makers to accurately reflect the risk and return characteristics of the investments to a suitable investor.  So have municipal securities become a risky investment?

Based on the most recent studies available, defaults on rated municipal securities remain extremely low. From 1999 to 2012, Fitch-rated securities experienced thirteen defaults across the spectrum of municipal securities the firm rates.  This equates to a default rate of 0.04% during this period.  Of the thirteen defaults recorded through 2012, eleven carried speculative ratings at the time of default (the other two were BBB – the lowest investment grade rating).  If investment-grade municipal bonds are analyzed, the default rate drops to 0.01%. (Fitch 2013).  Over a longer period of time, 1970 - 2011, Moody’s-rated securities experienced 71 defaults with the majority occurring in healthcare-and housing-related projects (73% of recorded defaults).  Of the 71 defaults, 66 of them have been defaults on non-GO debt.  Only a single GO issuer has defaulted (of 9,700 rated at the end of 2011) in the last three years.  That is not to imply that the recession has had no impact on default rates, it certainly has.  From 1970-2009, there was an average of 2.7 defaults per year, a number which jumps to 5.5 in 2010-2011, more than double the previous average.

Compared to global corporate bonds, municipal bonds experience a lower default rate and have a higher recovery rate.  According to Moody’s, the 5-year historical cumulative default rate for investment-grade municipals is 0.03%, compared to 1.02% for corporate.  In addition, speculative-grade corporate issuers are more than four times likelier to default than speculative-grade municipal issuers over a five-year period.  From the recovery side, the average for municipal bonds was 65% for 1970-2011, compared to 45% for corporate bonds.  It is worth noting that within that 65% figure there is a high dispersion rate across municipal recoveries, with some securities getting 100 cents on the dollar and some getting as low as 5 cents.  (Moody’s 2012).

Another way to compare ratings across municipal and corporate bonds would be to look at their transition rates.  That is, within a given annual period, how likely was a bond that held one rating to end up in another rating category by the end of the year?  Changing categories can be a positive or a negative event (upgrade or a downgrade respectively), but looking at the overall stability of ratings can give you a sense of how reliable the rating is, and the level of attention you would need to devote to monitoring the security for potential movements.  The chart below shows the transition rates for Moody's from 1970 - 2011.  As you can see, municipal securities move less frequently than corporate bonds, with only 6.64% of A-rated municipal securities changing rating category in an annual period, compared to 13.65% for corporate bonds. 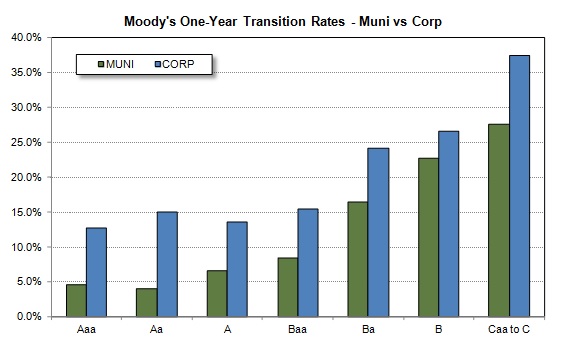 The well-documented record of the relative safety of municipal bonds in general strongly suggests that there is no reasonable basis for a wholesale retreat from municipals as an asset class.  It would still be fair to say that as conditions change, the real risk is no different today than at any other time.  That would be the risk of unbalanced, over-concentrated portfolios, where the investments may be more volatile than recent history would suggest, causing irrational real-time decisions in times of market stress.