Next Tuesday and Wednesday, the Federal Reserve Open Market Committee (FOMC) will meet to discuss potentially raising interest rates for the first time since they lowered them to 0-0.25% on December 16, 2008.

The Fed will certainly be facing more pressure to raise rates than it has felt in a long time. Last week unemployment numbers came in at 5.5%, meaning that the economy is now within the 5.2-5.5% range the Fed previously indicated would be consistent with a 2% inflation target. There are still concerns about stagnant wage growth and the large number of jobless who have dropped out of the labor market, but the overall trend is up. Stock markets fell and Treasury yields climbed as investors now see rate hikes as a near certainty this year.

Using probabilities implied by Fed Funds Futures trading on the Chicago Mercantile Exchange (CME), we can take some guesses on when investors think a rate increase will take place. The chart below shows the implied probability of a rate hike at each of the Federal Reserve meetings this year. The majority believes that we will have some type of rate hike in September of this year, with the odds picking up to one-in-five beginning with the June meeting. 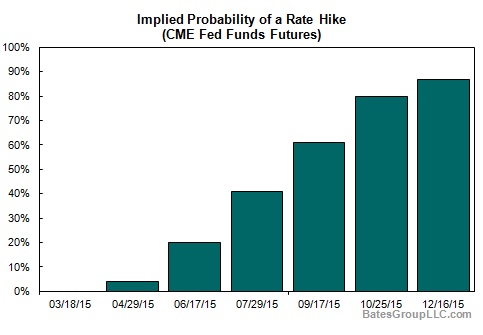 Another way to look at potential rate hikes is to check the implied probability of different interest rate levels as of year-end 2015. The chart below shows the possible outcomes in addition to the associated implied probability of each occurring. Assuming that the Fed does not raise interest rates by more than 0.25% at any meeting, people betting on a year-end rate of 1.75% are assuming an interest rate hike at every meeting of the FOMC this year (0.10% of market participants believe this will happen). The bulk (about 78% of market participants) of Fed futures activity suggests that there will be rate hikes at two to four meetings this year (corresponding to a year-end rate in the 0.50-1.00% range). 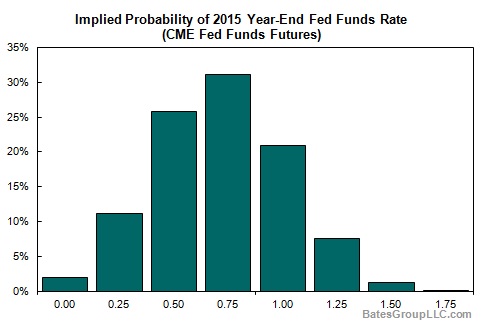 By combining the information from the two charts above, we can assume that the roughly 20% of people forecasting a year-end rate of 1.00% believe that rate hikes will occur at every meeting starting in July, when the probability of a rate hike at each given meeting really picks up. The density of people believing there will be a rate hike at the final two meetings of the year (80% in October and 87% in December) and the 61% believing one will occur in September would correspond to the roughly 57% of people who think we will end the year at the 0.50% or 0.75% level.

The issue of rate increases is critical for investors and will have a big impact on market performance this year. It also presents an additional source of risk to financial services companies. As we noted in a previous post, both FINRA and the SEC have identified interest rate-sensitive securities as examination priorities this year, and rising interest rates would accelerate an accumulation of losses that the agencies believe are potentially out there. Losses would ensure greater regulatory scrutiny falling on advisors and broker-dealers who had clients invested in those securities. Markets will be looking at this next FOMC meeting's minutes closely to try and gauge exactly when the hikes will occur.