On Thursday, the Swiss National Bank unexpectedly announced that it would no longer seek to defend an exchange rate of 1.20 Swiss francs per euro. The surprise announcement caused the franc to appreciate against the euro in excess of 16% in a single trading day, a sizable move in currency markets.

The policy of capping the exchange rate at 1.20 Swiss francs was originally adopted in 2011, when fears caused by the European Debt Crisis were leading increasingly spooked investors to buy safe assets that would be unaffected by the euro's problems. Switzerland, long a bastion of stability, saw an enormous amount of capital rush its borders, causing its currency to appreciate. A rising currency value put a lot of stress on the real economy within Switzerland, which is highly export oriented. Most of its exports go to euro-area countries, making the rise in value of the Swiss franc against the euro a particular problem.

The financial flight into Switzerland led the Swiss National Bank to adopt a cap on the maximum value it would allow the Swiss franc to trade at against the euro, a rate which it believed would protect exporters. As you can see in the chart below, the peg of 1.20 has roughly held since it was adopted in 2011. 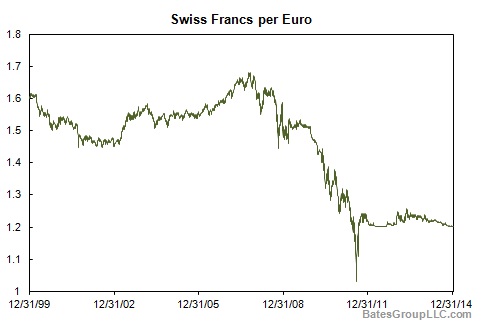 So what changed? For years Switzerland has been selling francs and buying euros in order to defend the cap – theoretically it is possible for a central bank to do this forever, as it can print as much of its domestic currency as it wants. Of course, consistently expanding the monetary base can lead to inflation and all sorts of other problems for the domestic economy, but there are no signs that that was happening in Switzerland (see chart below). 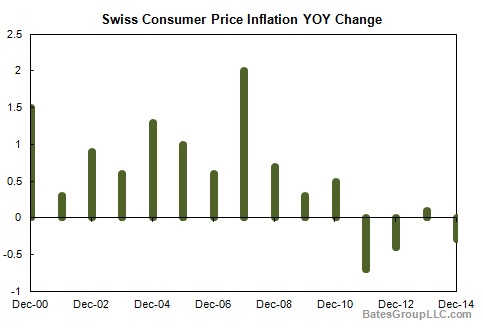 What changed was the policy stance of the European Central Bank, which has cleared the way to begin a quantitative easing program of its own. There are many reasons to explain why this step is probably necessary to help solve the current economic stagnation in the eurozone, but in practical terms it means that the ECB will begin printing euros in order to buy more bonds. More available euros should cause downward pressure on the value of the euro, meaning that Switzerland would have to print even more francs to buy even more euros in order to defend the peg. The cost of maintaining the current program has been substantial; you can see the huge rise in foreign reserves held at the SNB in the chart below. 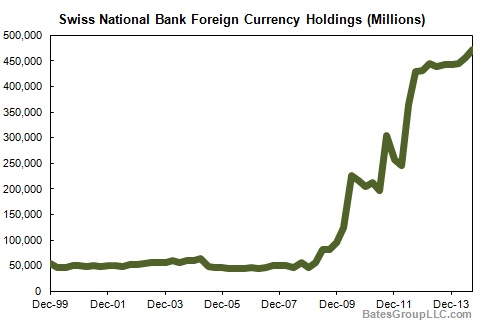 Switzerland is making the educated guess that the costs of defending the cap against the mammoth powers of one of the world's major central banks are too high to be justified.

While the move was a surprise, market commentators have noted that it was probably better for the SNB to act now, rather than to have the cap broken by market forces later on. Thomas Jordan, chairman of the SNB board, noted that "once it was clear that the policy was no longer sustainable, it was important to act quickly. It is better to do it now than in six or 12 months when it would hurt more." Simultaneously, the SNB is lowering the rate it pays on reserves to -0.75% from -0.25% in order to prevent safe-haven seeking capital from flowing into the country once more. Rates were taken into negative territory for the first time less than one month ago in order to ward off increasing capital inflows caused by the currency crisis in Russia.

Swiss stocks are being hammered by the announcement, especially shares in export focused companies. The CEO of Swatch Group has been particularly vocal about the announcement - "Words fail me! ...today's SNB action is a tsunami; for the export industry and for tourism, and finally for the entire country." Turmoil in currency markets created massive losses for some US brokers like FXCM and Interactive Brokers Group, which then filtered into mutual funds (like Invesco Small Cap Value and the Janus Venture Fund) who held their shares. Shares in currency funds were caught wrong-footed by the SNB's sudden move as well. While the franc seems to have settled at roughly one-to-one parity with the euro for now, there is no telling whether or not (or to what degree) it will strengthen as the ECB begins its quantitative easing program.